The Romanian Chivalric orders perpetuated during centuries in the Carpathian mountains in Transylvania (Transilvania) and in Wallachia (Valahia) and Moldavia (Moldova) the historical and present day regions of the Romanian state. Ancient chivalric orders can be attested since ancient times, starting with the Kingdom Dacia and continuing with the Grand Duchies of Gelu, Glad and Menumorut till the Middle Ages and Modern and contemporary Romania, continuing the millenarian tradition of Honour and Respect. 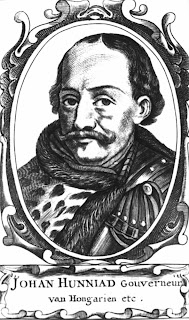 The Romanian nobleman rapidly integrated into the Hungarian and European nobility and advanced as Ban of Severin, Army General (known as the White Knight), Prince of Transylvania and Regent-Governor of the Kingdom of Hungary. Ioan de Hunedoara was married with Elisabeta de Sălaj (Countess of Sălaj). After the death of the Hungarian King Albert of Habsbourg he was appointed Regent-Governor of the Kingdom. Ladislau V was a recent born and his mother, Queen Elisabeth had the support of the richest Hungarian families. Those families were seeing an opportunity to rule Hungary.

Ioan de Hunedoara was supported by the low and middle class nobility and also by the Hungarian Palatine Laurențiu Hédérvary and by the Bishop of Eger. They elected as King the Polish King Vladislav. After its coronation in Alba Iulia (the city where was forged the Romanian modern state after World War I) started the bloody civil war.

After helping the new King of Hungary in the battle, Ioan of Hunedoara received the title of Prince of Transylvania (in 1441). In the year 1446 he is appointed Governor of the Kingdom of Hungary. In the year of 1448 he receives the title of Prince from Pope Nicholas V for fighting against the ottomans. I must mention that Ioan de Hunedoara was one of the most important obstacles in the path of the Ottoman Empire through Europe.

In 1453 he receives another title, that of Count of Bistrița-Năsăud ad General Captain of the Kingdom. On his coat of arms he added the Red Lions of Bistrița (Leii Roşii de Bistrița).

After defeating Mehmed II the Conqueror, Emperor of the Ottomans, he dies in 1456. Funerals are held in the St Michael's Cathedral of Alba Iulia and on his stone, Masons left an inscription saying: "The Light of the World turned out." 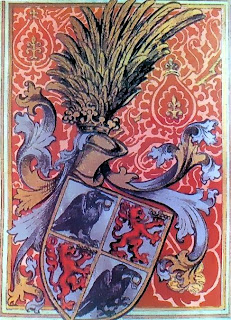