Saint Alexander celebrated on August 30 by the Christian Orthodox Church 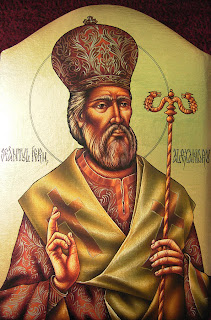 He was the Vicar of Saint Metrophanes, after which serving 23 years as Patriarch until his death. During his patriarchy, Alexander engaged in debate with pagan philosophers and opposed heresies. He was highly praised by Gregory Nazianzus and Epiphanius of Cyprus. Theodoret called him an "Apostolic" Bishop.

He attended the First Council of Nicaea after which the Patriarch of Alexandria asked for his help regarding the "Arians". After his death, Alexander came to be regarded as a saint of the Church. The service in his honor was printed in Venice in 1771. Today, his feast day is celebrated annually on August 30, in a common commemoration with his fellow Patriarchs of Constantinople John the Faster and Paul the New.