Saint Sophia Church of Nicaea was transformed into a Mosque

One of the most emblematic churches in the Christian world Saint Sopha's Church of Nicaea (known now as Iznik, modern day Turkey) was recently transformed into a Mosque. St. Sophia Church is a symbol of the Orthodoxy world and hosted the Council of Nicaea of 787. Saint Sophia was converted into a Mosque in 1331 after occupation by the Ottomans. The curch remaind a mosque until the arrival of the Greek army during the campaign in Asia Minor at the end of the Great War. In 1922 it burned down due to fire, and never served as a church, or the mosque. 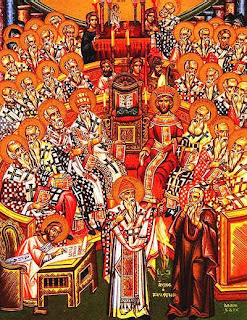 Recently, the Turkish government decided that the church will function as a mosque. This decision coincides with Muslim Ramadan.

The First Council of Nicaea (naɪsi:ə; Greek: Νίκαια) was a council of Christian bishops convened in Nicaea in Bithynia (present-day İznik in Turkey) by the Roman Emperor Constantine I in AD 325. This first ecumenical council was the first effort to attain consensus in the church through an assembly representing all of Christendom.

Its main accomplishments were settlement of the Trinitarian issue of the nature of The Son and his relationship to God the Father, the construction of the first part of the Creed of Nicaea, settling the calculation of the date of Easter, and promulgation of early canon law.